So, after leaving this project somewhat dead for the past few months, I had the rare coincidence of running into a former native of the Florida Keys at a Park & Recreation conference a few days ago. This guy, who was there during the early 90's would go "island-hopping" with his high school buddies around the area just seeing what they could find when they heard about this island with monkeys on it. Apparently, they heard about the island, decided to pay it a visit via outboard motor boat and witnessed from their boat at least 8-9 monkeys on the shoreline.

Out of safety concerns, the group opted not to approach the 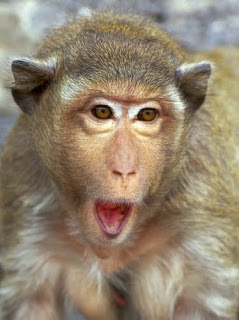 island, but rather observe the monkeys from a distance. Most of the monkeys simply walked around the shoreline, equally as curious. However, a few weeks prior to this incident, another group of high school students paid a visit to Lois Key. These visitors were much more daring in their approach, coming right up on the shore. One of them, an offensive lineman, decided it would be funny to mimic the monkey. The monkey screeched, he screeched back. The monkey jumped up and down, he jumped and down.

By this point, the monkey was getting pretty annoyed by the guy's behavior, so he did what any wild animal would do - lash out. The monkey took a swipe at the lineman's face out of annoyance, the gutsy men had a laugh at the lineman for being foolish, cranked the motor and high-tailed it out of there.

I also stumbled upon some additional interesting information that proves that Charles River Laboratories is still up and running with its usual mayhem. Apparently, about 32 monkeys were baked to death in one of their Nevada Laboratories, and yet another was scalded by hot water all due to negligence on the part of the company.
Posted by - D. Ellis at 4:07 PM 5 comments: 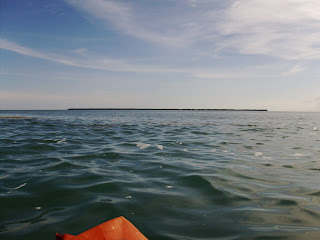 We set out in a pair of kayaks yesterday from the southernmost point in Summerland Key and completed the 1.5 hour journey across the ocean waters to Lois Key. En route we saw a variety of wildlife including four dolphins that jumped out of the water alongside our kayaks and a manta ray with a 5-foot span that also propelled itself into the air for a quick dive.

Utilizing GPS we approached the island intent on scouting the south shore where the beaches appeared plentiful and where the supposed free-roaming monkeys were located. (The caged monkeys that were no doubt easily removed were located in the north)
We paddled into a small jetty that took us into the heart of the southern part of the island. We took notice of a large flock of geese nested on the outskirts of the island and heard at least three faint monkey calls in the distance, but received no visual confirmation of their existence. The water was stagnant and 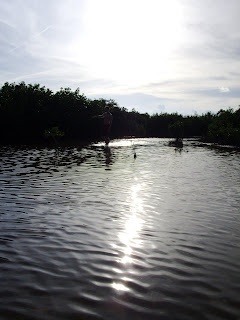 warm, with little to no dry walking areas. A proposal to camp overnight at the island was shot down following this discovery.

The island's mangrove population was astonishing. The green shrubbery encompassed most of the shoreline, with the occasional "No trespassing" and other warning signs staked in the shallows. Remnants of old boats and wooden fence frames combed the outside along with a large number of ropes designed to contain the mangroves.

Although the northern part of the island was left relatively unexplored, we were content with our survey of the island. As to whether monkeys remain on the islands... the final result is INCONCLUSIVE.

For a more extensive research into the subject, we would need to conduct an investigation into the work of Charles Rivers Laboratories and their removal of monkeys from the island. Furthermore, satellite imagery revealed no major installations in the northern part of the island, though common sense recommends a standardized entryway or command center. Irregardless, the evidence of destruction caused by monkeys was present, however, the island did little more than give off an eerie feeling of an experiment gone haywire. Needless to say, there were no longer 1000's of monkeys going buckwild on this small island in the keys.
Posted by - D. Ellis at 10:06 AM 1 comment:

So I figured I'd document my up and coming expedition to Lois Key, aka the renowned "Monkey Island" of the florida keys where Charles Labs did a bunch of research on monkeys back in the 1990's that went haywire. Eventually the monkeys took over the island, destroying the local wildlife and vegetation, stripping the island bare. The scientists all but abandoned the project fearing for further ecological damage. Plus the monkeys were exceedingly out of control and vicious. Many exhibited rabies 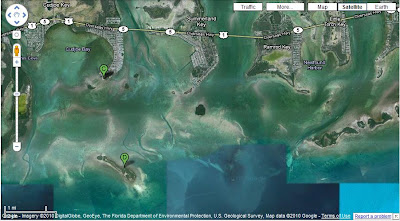 (Left): Monkey Island is the south island on the map designated by the "D"

Apparently, signs clearly mark the island, warning off visitors saying trespassers will be prosecuted, yadi, yadi, yadi. However, since this is a privately run island, there can't be any federal prosecution for visiting it.

Looking at google maps, research reports on the subject... the island is roughly 1.9-2.6 miles south of the nearest beach landing depending on whether we use summerland key or cudjoe key.

We're going to try to make the excursion via kayaks when conditions are right. We will be equipped to fend off attacks. The number of monkeys occupying the island still remains in question, however if nothing else we'll find ruins.

Also locals give conflicting reports of another island near Marathon off the bay side of the seven-mile bridge that is also inhabited by monkeys, however, we're awaiting confirmation. 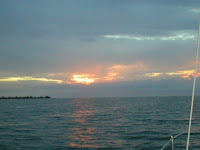 Regardless, all signs indicate that there are monkeys, as locals have reported hearing their screeches from a distance.
Posted by - D. Ellis at 12:03 PM 2 comments: